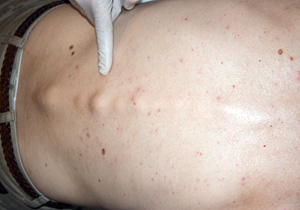 39 year old male came in today with chief complaint of not being able to move his neck. Patient was diagnosed with Ankylosing spondylitis in his 20s. Up to a year ago, although his range of motion was compromised but still he was able to move the neck somewhat , however since then his range of motion has been getting worse, at this point he can not move the neck at all; cervical range of motion=0 degree in all axis. He is other wise a healthy male. He takes no medications and he receives regular chiropractic treatments. He is working and is productive, and he has noted eating vegetables helps his condition.

Discussion: Ankylosing spondylitis is an auto-immune entity that can cause inflammation of the entire spine and the sacroiliac joints. The chronic inflammation here can cause pain and stiffness, in the long term the spondylitis (medical lingo: spinal inflammation ) can lead to a complete fusion of spine. Ankylosing spondylitis is much more common in males than in females. (in fact I have not seen it in females as of yet) Most commonly striking patients in their 20s and 30s. It is felt that the problem is genetic, and there is a specific blood test for it known as HLA-B27. The symptoms are typically pain and stiffness in lower back, upper buttock area, neck, and possibly the rest of the spine. X-rays and physical exam may show the appearance of so called bamboo spine (see picture). TNF blockers (Enbrel, Humira and Remecade) may play a role.