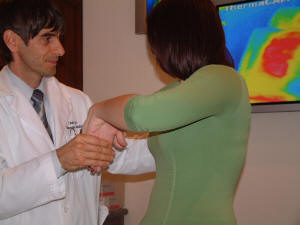 40 year old right handed female complains of waking up from sleep almost every night with numbness of hands which improves by shaking the hands. She also says, opening a jar of peanut butter is getting more difficult day by day secondary to weakness developing at the level of the wrist. Her past medical history is negative for any history of rheumatoid or thyroid problems. She takes Glucosamine since a friend recommended but sees no improvement yet. She does not smoke and otherwise is healthy. Patient is a data-entry personnel. Phalen's test

Discussion: Carpal tunnel syndrome occurs when the median nerve, which runs from the forearm into the hand, becomes pressed or squeezed at the wrist. The median nerve controls sensations to the palm side of the thumb and fingers except for the fifth digit or also known as little finger, Median nerve also carries impulses to some small muscles in the hand that allow the fingers to move. The carpal tunnel is a narrow, rigid passageway of ligament and bones at the base of the hand which contains the median nerve . Sometimes, thickening from irritated tendons or other swelling narrows the tunnel and causes the median nerve to be compressed. The result may be pain, weakness, or numbness in the hand and wrist, radiating up the arm. Although painful sensations may indicate other conditions, carpal tunnel syndrome is the most common and widely known of the entrapment neuropathies in which the body's peripheral nerves are compressed or traumatized Symptoms of Carpal tunnel syndrome starts gradually, with frequent burning, tingling, or itching numbness in the palm of the hand and the fingers, especially the thumb and the index and middle fingers. Some carpal tunnel sufferers say their fingers feel useless and swollen, even though little or no swelling is apparent. The symptoms often first appear in one or both hands during the night, since many people sleep with flexed wrists. A very common symptom is the patient may wake up from sleep, feeling the need to "shake out" the hand or wrist. As symptoms worsen, people might feel tingling during the day. Decreased grip strength may make it difficult to form a fist, grasp small objects, or perform other manual tasks. In chronic and/or untreated cases, the muscles at the base of the thumb may waste away. Some people are unable to tell between hot and cold by touch. Carpal tunnel syndrome is often the result of a combination of factors that increase pressure on the median nerve and tendons in the carpal tunnel, rather than a problem with the nerve itself. There may be a genetic factor since the carpal tunnel is simply smaller in some people than in others. Other contributing factors include trauma or injury to the wrist that cause swelling, such as sprain or fracture, mechanical problems in the wrist joint, fluid retention during pregnancy or menopause, work stress, repeated use of vibrating hand tools rare causes such as over activity of the pituitary gland; hypothyroidism; rheumatoid arthritis; or the development of a cyst or tumor in the canal are possible as well. There is little clinical data to prove whether repetitive and forceful movements of the hand and wrist during work or leisure activities can cause carpal tunnel syndrome. Repeated motions performed in the course of normal work or other daily activities can result in repetitive motion disorders such as bursitis and tendonitis. Women are three times more likely than men to develop carpal tunnel syndrome, perhaps because the carpal tunnel itself may be smaller in women than in men. The dominant hand is usually affected first and produces the most severe pain. Persons with diabetes or other metabolic disorders that directly affect the body's nerves and make them more susceptible to compression are also at high risk. Carpal tunnel syndrome usually occurs only in adults. The risk of developing carpal tunnel syndrome is not confined to people in a single industry or job, but is especially common in those performing assembly line work - manufacturing, sewing, finishing, cleaning, and meat, poultry, or fish packing. In fact, carpal tunnel syndrome is three times more common among assemblers than among data-entry personnel. A 2001 study by the Mayo Clinic found heavy computer use (up to 7 hours a day) did not increase a person's risk of developing carpal tunnel syndrome. According recent data an estimated 3/ 10,000 workers lost time from work because of carpal tunnel syndrome. Half of these workers missed more than 10 days of work. The average lifetime cost of carpal tunnel syndrome, including medical bills and lost time from work, is estimated to be about $30,000 for each injured worker. Early diagnosis and treatment are important to avoid permanent damage to the median nerve. A physical examination of the hands including Tapping over the carpal tunnel may result in tingling sensation in the distribution of the median nerve in carpal tunnel syndrome. This is known as Tinel's sign. Another exam is Phalen's test which while the wrists are held in flexion for 60 seconds or less and patient begins to experience symptoms. (see picture). The wrist is also examined for tenderness, swelling, warmth, and discoloration. Ultrasound of the median nerve is also usually useful.