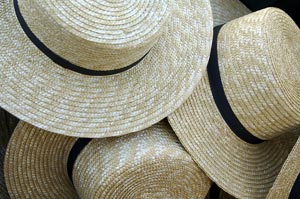 13 year old Amish male from Arkansas presented to the office today with complaint of pain and swelling in both knees for almost six months. Patient states whenever he runs or plays any sports the knees start to swell and ache.

His family history is of significant of an older brother (age 17) who has been treated here for OCD (Osteochondritis Desicans) already. His very eldest brother also complains of knee pain occasionally especially when he walks long distances, which requires him to wear a knee brace (he has not been evaluated for his pain however at any facilities).

On physical exam his X-Rays are significant for formation of ossicle anterior to the tibial tuberosity in both knees (as seen in Osgood-Schlatter ), with no evidence of OCD. On physical exam both knees are edematous (medical lingo; swelled up) and tender to touch.

Discussion: This is an interesting case since it shows the possibility of genetic predisposition in Osteochondritis Dessican and Osgood Schlatter disease. Osgood Schlatter disease was initially described simultaneously by Osgood and Schlatter in 1903, consisting of lesions affecting adolescent apophysis of proximal tibia(particularly in young athletes), it seems to be way more often in boys than girls by a three to one ratio.(3:1). Males typically are older at presentation, it is only bilateral in 25-50% (even though both brothers had it bilaterally (medical lingo: on both sides). It is symptomatic with pain, heat, tenderness at tibial tuberosity with local swelling and a prominent tibial tuberosity . Pain is exaggerated with resisted knee extension .