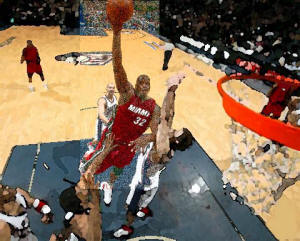 Some serious NBA action on TV today, while cheering for my home team Miami Heat, which is an NBA title contender thanks to the efforts of Miami center Mr. Shaquille O'Neal . The All-Star sports icon had to rest for several weeks in the playoffs, no thanks to a bruised thigh , did not get to practice or play since Game 2 of the second round of playoffs against Washington Wizards, he returned back to the court only last week after much speculation whether he will start in game one of Eastern conference finals against Detroit Pistons( The former world champions). The contusion (medical lingo: Bruised) has troubled Mr. O'neal for over a month.

Discussion:
Contusions in sports injuries are very common, typically caused by a forceful blow in to the muscle cells, muscle fibers and connective tissue gets damaged, there is some bleeding inside, skin does not break, but usually gets discolored (black and blue) as healing starts. Most contusions are minor and heal quickly without any help by themselves. Healing can be slowed by repeated traumas and not resting the area. Healing can be accelerated by R.I.C.E.

R.I.C.E is a good way to memorize and remember the basic steps to help most muscular skeleton injuries, it stands for; Rest: and stay away from it as long as it takes till it's almost 100%.

Ice: some say put the ice on the bruised area for 10-20 minutes, I believe how ever if the ice is massaged deep for 3 minutes 4-5 times a day it will be more effective.

Compression: Do not be to aggressive on this since you may cut off the blood supply, this will help.

Elevation; you must elevate above the level of the heart, this way you use gravity to your advantage and decreasing the edema caused by the contusion.

Medication wise dietary supplements known for healing properties such as Zinc and Amino acids may play a role. Low level Lasers may help as well. Sometimes rehabilitating a severe contusion too quickly could cause myositis ossificans in this entity in the bruised area bone may grow instead of muscle cells.