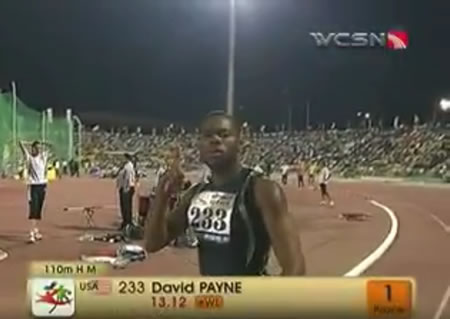 Despite weeks of intense physical therapy, David Payne was on the field for last week's practice because of cell therapy injections. Payne suffered a minor injury to his shin area several weeks ago. These injuries can often take weeks to months to heal, but Payne wasn’t about to let it affect his ability to play hard. For this reason, Mr. Payne visited The Center for Regenerative Medicine.

According to Dr. A.J. Farshchian, Medical Director for The Center for Regenerative Medicine, explains; “Sports injuries need an adequate blood supply and cellular migration. Platelet-derived growth factors are critically involved in this process. These cells allow the body to take advantage of the normal healing pathways at a greatly accelerated rate. During the healing process, the body rushes many cells and cell-types to the injected area in order to accelerate the healing process. These cells perform many functions, including release of growth factors (GF) into the diseased or arthritic and injured sites. Farshchian further adds, David Payne isn’t the only athlete to reap the benefits of cell therapy. Hines Ward got his injection before the Super bowl, Tiger Woods got his knee repaired last year and L.A. Dodgers Takashi Saito was able to pitch in the playoffs thanks to an injection into his right elbow’s ulnar collateral ligament, which saved him from Tommy John surgery.”

Mr. David Payne has had an incredible Olympic career. He grabbed the final qualifying spot for the 2008 Beijing Olympic team and went on to win the Silver Medal in the 110m hurdles in a record time of 13.17 seconds. He continued at top performance at the 2009 world championships in Berlin.

Payne remains strong a contender in the upcoming Nationals, and is looking forward to taking the Gold at the 2012 London Summer Olympics.