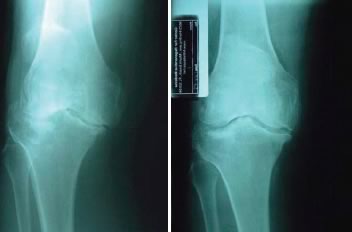 PL is a 49 year old male who initially damaged his right knee playing Football in his youth. Patient initially was seen in our office on February of 2003. At that point he was told he needs a total knee replacement, but due to his age doctors advised him against it. His past medical history is otherwise unremarkable. Patient does not smoke and only drinks socially. On exam he had point tenderness to the medial side (medical lingo: inner side). An X-Ray showed severe arthritis of the knee (X-ray on the left). Patient started receiving treatments at the Center for regenerative Medicine. Today he is feeling better. (Recent X-ray on the right).

Discussion: The signs and symptoms of osteoarthritis vary from individual to individual. But the main symptoms associated with osteoarthritis are stiffness and pain. Typically, stiffness is worse in the morning mostly lasting less than 15 to 30 minutes, and subsiding after resting: moving the joint for a few minutes can help shake off the stiffness often associated with osteoarthritis. Joint pain also may be severe after exercising and at the end of the day. Another sign of osteoarthritis of the knee is the grinding sounds that occur when the knee moves. You can simply hear or feel this grinding sensation by putting your hand over the knee and then bending the knee. Also at times moving the joint through the full normal range of motion may be difficult. In more advanced osteoarthritis, muscles may become weaker and atrophy. Joints also may appear larger than the healthier joint, this is mostly caused by new bony growths called spurs or osteophytes. The knees swell up at times sometimes with no reason at all. The above case is probably the most extreme case seen at our center.