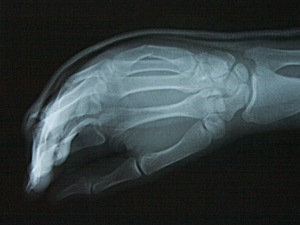 21 year old professional motorcycle racer presenting to the office with complaint of pain of the right hand, patient had a bad fall while doing a motorcycle jump, falling on his right hand. His past medical history is unremarkable, he takes no medications. He works out and he has been racing since age 12. An X-ray shows Boxer's fracture.

Discussion: This fracture is a common injury of hand involving the 5th metacarpal named "boxer's fracture" because of common occurrence in prize fighters and boxers. In this patient however it happened after a bad fall. The fracture fragment is sometimes angulated and may be externally (medical lingo: turned towards outside) rotated. This typically happens after direct trauma to the hand, It is usually caused by punching something harder than the hand, such as a human skull or a wall. Typically the fracture is at the narrowest area near the distal end of Metacarpal bone.