Tuberculosis of The Hip 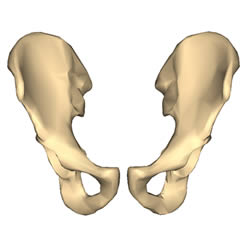 Tuberculosis of The Hip

RKis 54 year old white female from Fiji who was was initially diagnosed with hip pain at the age 7. At the time, she recalls "living at a rural area in a farm with her pain persisting despite various treatments". Subsequently after several visits to different physicians fluid was aspirated from the hip and sent to a lab, a culture was positive for tuberculosis; Patient received daily injections of Streptomycin for 6 months. By the time treatment started some damage was already occurred. She did OK and got by until 3 years ago when her right hip was replaced using a Birmingham implant, at this point she is looking for an option to salvage her left hip. Her past medical history is otherwise remarkable for Hypertension, which is under control. She does not smoke and she rarely drinks alcohol. Patient's chief complaint was that she can not walk too much. She felt weakness in the left hip, she tried to cope with the pain and at times she got some relief from Ibuprofen . Patient used a cane at times. Patient takes different multi-vitamins, Glucosamine as well as Omega3.

Discussion: After the spine, the hip joint is the most common site of involvement for tuberculosis. Osteoarticular tuberculosis has become very rare in western countries, but it is still a common problem in under developing countries. Since it is so rare, the diagnosis is usually delayed or it is not included in the differential diagnosis of juvenile arthritis. delay in the diagnosis is an important cause of outcome because of the nature of the hip joint in a growing child. Although the definite diagnosis is provided by identification of the bacillus in the specimens, this is not always possible in childhood. Tuberculosis of the hip must be in the differential diagnosis of a limping child. A detailed family and environmental history for pulmonary tuberculosis, history of tuberculosis vaccination, and a tuberculin skin test should be performed.